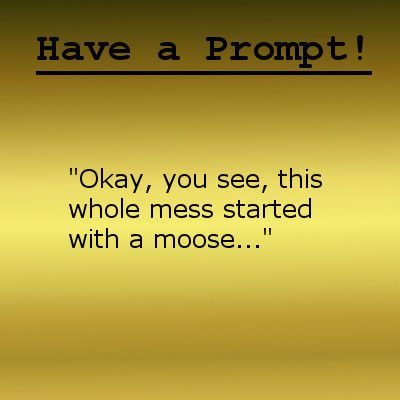 I know you might not believe me, but it’s true. Honest.

It was a moose who started the whole damn thing.

Okay, so I was home alone on Saturday night. I woulda been out with my friends, but I’d been grounded.

Grounded? Yeah, I know. So lame, but my folks don’t mess around with punishments. And if I left and they found out….. you don’t want to know.

It was Halloween and I was angry because I was missing all the candy, even with Cindy promising to bring me a bag. Sitting there, trying to figure out if I wanted to watch “Friday the 13th” or “Nightmare on Elm Street.” Freddy or Jason. I missed being too old for “It’s the Great Pumpkin, Charlie Brown.” But if you ever tell anybody I said that, I’ll call you a liar.

Anyway, back to the moose.

Now, I don’t know if you’ve ever heard a moose, but they sound spooky as hell. They certainly don’t sound like any creature I want to meet in the dark.

About the time I popped “Nightmare on Elm Street” – sorry Freddy – into my computer, I heard it, sounding like it was just outside my window.  I jumped up to look but didn’t see anything and it’s hard to miss a moose.

This happened again and again. Moose call. Jumping up. No moose.

I lost track of the movie. I got pissed at the Moose. I know, like that’d do any good.

Around about midnight, I grabbed my jacket and headed outside, determined to find the damned moose or whoever was pranking me. It’d be just like my friends to do something like that.

Circling the house, I scanned the woods, wishing I’d thought to bring a flashlight. Nothing. Just as I came back around the front of the house, I glimpsed a flash of white in the darkness. At the same moment, the moose sounded.

Shit. Now, I knew I was being pranked.

Taking off through the woods, I chased them, catching glimpses of white in and among the dark trees. But damn it if I could catch them.

Stumbling out into a clearing, I stopped suddenly.  Right in front of me stood a moose. A heck-of-a-giant moose. A freaking white moose. Glowing eyes.

The next second the moose vanished.  I mean vanished into thin air.  None of that turning and running away. Just gone. Poof!

I looked around, not recognizing the clearing. I must have run further than I’d thought.

I couldn’t even remember which way I’d come.

Dad had taught me how to navigate by the stars and so I looked up.

Holy cow of a mother!

Not a single star looked familiar.

Where the hell was I? Not in Kansas anymore.

“I don’t understand,” Mrs. Thatcher cried. “Why would he run out into the road with a car coming?”

Her husband just shook his head, staring down at the grave-site where his son lay. Hours. Days. Nights. Forever.