How much time did you spend outdoors yesterday?

Yesterday being such a beautiful day, I should have spent as much time as possible outside, but I didn’t.

I let Evie out back when I got home instead of taking our walk. I know….I know. I did sit out back while she ran around, both of us enjoying the Spring weather. Then, all those things I didn’t do yesterday… I did about half.

Oddly enough, I love spending time outdoors, but I rarely do. I’m always inside writing or reading or any such thing. (Cleaning! Bleek!) The funny thing is, I could so all those things outside. Writing. Check. Reading. Check. Cleaning….. check! My lawn needs serious work and I have flowerbeds to prepare for spring. Plus a shed to clean out for a Big-Trash Pickup. Yadda….yadda… yadda…..

So why don’t I spend more time outside?

I am so set in my ways, that I don’t normally think about it. Or it’s rainy or cold or hot or any other excuse. Once I get outside and starting working or reading or any other task, I can’t believe I stayed inside so long.

I love working in my flower beds. Two years ago, giving up on the fight to re-grass my front yard, I turned half the yard into a bush/flower bed. The problem is I really need somebody to keep me focused. I’m working in this flower bed and suddenly think of something for another flower bed and off I go. Or I have a bunch of things to plant and I get overwhelmed and can’t decide where to plant them.

My main problem is that I should NEVER be allowed to go into Lowe’s or any garden center alone! I have warned many people, but no one listens so I can’t be held responsible for the carts full of plants with which I emerge.

But, seriously, I do love working in the yard and gardens. I love taking Evie for a walk. It is just a matter of making myself take the first step. After that, I’m good to go.

If you break your neck, if you have nothing to eat, if your house is on fire—then you got a problem. Everything else is inconvenience.  ~Sigmund Wollman, quoted by Robert Fulghum, Uh-Oh, 1991

What did you leave undone yesterday?

I feel like I left so much undone yesterday, I’m not sure where to begin. I didn’t really, I don’t think, but that doesn’t change the way I feel. I avoiding going to the Woman’s Meeting at Church. But because I planned on going, I didn’t walk Evie when I got home. Then didn’t go. Did I mention I didn’t go?

I know, I should have gone. If I had just gone, I would have enjoyed myself. At the same time, I just didn’t feel social. And because I was expected to go, I rebelled. I just wanted to stay home and work on things undone in my house.

Which, may I point out, I didn’t do either. I still need to vacuum the living room and dining room. Clean up the poop where the cats have graciously gone outside the potty box. I didn’t do laundry, sort and put my clothes away, sort jewelry or even sort out the recycles. Washed the dishes. Cleaned the laundry room floor.

At one time in my life, I would have agreed.

That said, my day might not have gone as I would have liked, but it was a day. I survived the bumps and bruises of daily living.  I survived the pleasure of happiness and the disappointment from the cancellation of my bank willingness to refinance my mortgage.

I survived the stories I tried to make in my head to counter the disappointment and the sense of personal failure. Survived the fear the coming rain will flood my basement again. That my dog might be sick.

There are more banks in the world. Today is another day to clean and scrub and sort and wash and put away. It is up to me to take responsibility for these issues and do my best to make things right.

Fear won’t stop my basement from flooding or my dog from being sick. Fear will only stop me from taking steps to correct the problems, or, at least, survive them.

This is the moment to step up, to hold my head up high and say to the world, “You can’t defeat me. I am strong enough to survive anything – and I mean anything – you throw my way.

Today, World, I will not leave my life undone.

Beautiful and thoughtful response to the question. 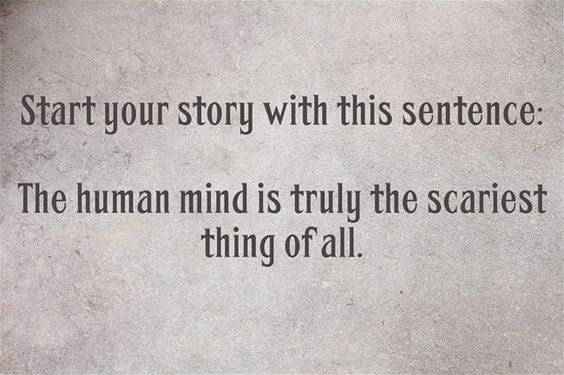 Tell me about it. I’ve faced many a danger, both in and out of uniform, but nothing like those men who set themselves up as- or maybe were born – evil. Lots of folks think there ain’t any such thing as good and evil, but they’re wrong. I’ve seen good in my life; good that made me cry, made my heart ache for the things an old soldier like me don’t get. And shouldn’t expect to get.

Been a long time ago, that. See, one day this man decided that he didn’t like… I don’t know… the color of my wife’s hair? Her eye? How tall she was? Or maybe just cause she was wearing an orange swimsuit. So he destroyed her. Destroyed the kids and the cats and the dogs.

Been a soldier since. Evil can come from the man across the border, at the door to the different church, the black to my white. Course, evil can come from anywhere, from your brother, father, friend. From greed and hate and envy, from worshiping the differences instead of the similarities.

Truth is, there weren’t no evil until man learned to think. Learned to want for hisself and not his community.

Now, I’ve had my say and I don’t expect most of you to understand or to care. Ain’t much care in this world either, but one of these days, we’ll be starting over. Just me and a few like-minded individuals who want things better.

If you ain’t one of us, if you’re oneof’em who don’t care, I suggest you started digging your shelter now…….

What pets do you have?

Back from a long weekend without a computer (at least a working one) and glad to be jumping back into my blog.

At this time, I have (or rather they have me) four cats: Oliver, Shadow, Meville and Gizzmo.  And the one dog, Evie.

Meville- She was found as a tiny kitten (too young to care for herself), by my son’s girlfriend. We kept her at the time,as the girlfriend’s family was moving, but when months passed and she remained, I declared she was home to stay. She is picked on by all the other cats and dog and is a very special girl. For years, she lived in my bedroom with me, sleeping on me at night, kneading herself to sleep on the blanket. She has now decided to live out in the rest of the house for the time being.

Oliver – The cat of a friend, I took him in when she moved and was unable to take him with her. He is shy and solitary. It took over a year to get him to come up from the basement and actually interact with us. The inaction is still few and far between. When he trusts you, he is a love-bug, but he will never be a social cat.

Shadow – He was abandoned as a kitten near my parent’s house. The kids were little and Mom decided we should adopt him. Usually, she was telling me we didn’t need another cat (had two at the time), but something about this little fluff-ball touched her heart. He is a sweet boy who loves laps and butting his head against my face.

Gizzmo – adopted from the SPCA and (I always mention) named by the SPCA. She, however, has lived up to her name in all ways. When the decision was made to keep Meville for good, we went out to the SPCA to get the girlfriend a kitten. And it was, Adopt One, Get One Free day so……. ah….. who can resist that?

Apparently, the staff at the SPCA fed her after midnight (check the Goonies movie if you don’t know the reference) and she was …. well, mean.  But not mean. I think she was so small and been handled – not nicely – so much that she just didn’t want to be touched.

Over the years, she has become a loving member of the family – as long as you respect her pet-me-now or don’t-pet-me moods. It has been amazing to see her watching and learning how to interact with us humans by watching the other cats.

And, of course, the newest member of the family, Evie, an abandoned Miniature Pincher found wandering in the neighborhood.  Yesterday, we went to the vet for her first round of shots and her city license. She is now official!

The first dog of the house and she brings joy to all! Well, the humans, at least. The cats…… not so much……

A warless world will come as men develop warless hearts.

We may be through with the past, but the past is not through with us. Ideas of the Stone Age exist side by side with the latest scientific thought. Only a fraction of mankind has emerged from the Dark Ages… ~Bergen Evans, “Adam’s Navel,” The Natural History of Nonsense, 1946