“Haters don’t hate you. The reality is, they fear that they will never be able to get to where you are right now.”

Feel free to join in and respond to the prompt. Please try to keep your response under 300 words. If you reply, I will re-blog your post to my site. 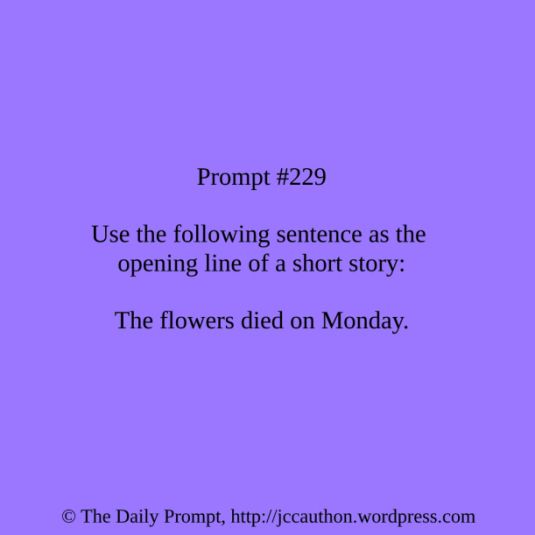 The flowers died on Monday.

She threw them away on Tuesday.

Wednesday, I left. For good.

It wasn’t like we’d fallen out of love.  If anything, we’d fallen more in love, so much more I smothered under the weight of her emotions.

Or had the streams of her feelings turned to hate when I wasn’t looking?

I don’t know. Things would have been easier had I known.

It’s easy to pretend to hate, but so much harder to walk out the door and never look back.

Thursday, I moved to California, half a world away from dead flowers in a dumpster.

On Friday, alone in an empty apartment, I cried.

Saturday, I left the apartment and never looked back.

Cindy turned from the window.  “It’s over,” she declared, with finality.

“It will never be over.”

“At least we got justice.”

“Justice? Is that what we just saw?”

“It doesn’t chance anything.”

“Now we can move on.” The tears started.

‘If you haven’t moved on after twenty years, why the hell will you now?’ he wanted to say, but didn’t.

“The Bible says an eye for an eye,” she insisted in a voice he knew too well, then walked out, slamming the door shut behind her.

He’d been all for killing the man who murdered their father. At the beginning. It had seemed a just and right fate; a place to put all his hurt and fear and rage. But things didn’t always work out the way he wanted.

He’d just watched a man die for killing his father.

No, he would never forget. But, now, he could forgive.

Other bloggers have expressed an interest in JSW prompts. Like I’ve always said, the more the merrier. If the urge strikes you to write off the prompt, please feel free to do so. You can link back to my original post and I will reblog your story onto A Writer’s Life. Please try to keep your response under 500 words for the sake of the reader’s time. Also, please do not write anything unfit for younger readers as I have no idea whether any of my followers are under 18.

I am trying to get onto a weekly schedule, posting the prompt on Mondays. This would give you at least a week to respond. If you need longer, go for it. Just remember to copy the prompt into your reply.

So, that said, the prompt for this week is:

“Love, when you get fear in it, it’s not love any more. It’s hate.”
― James M. Cain, The Postman Always Rings Twice

“Whoever has hatred toward someone is that hatred.”
― Belsebuub, Gazing into the Eternal: Reflections upon a Deeper Purpose to Living

“We are trying to build peace by inventing new war machines; if that isn’t insanity than what is?”
― Debasish Mridha

“Whoever has hatred toward someone is that hatred.”
― Belsebuub, Gazing into the Eternal: Reflections upon a Deeper Purpose to Living

The idea of Sunday Photo Fiction is to create a story or poem or something using around about 200 words with the photo as a guide. Please try to keep it as close to the 200 words as possible. It doesn’t have to be center stage in the story, I have seen some where the placement is so subtle, the writer states where it is.

He stared at the Flame, almost feeling it. Smelling it. Tasting it.

He liked Pain, the way it blazed through his body, washing him clean. Fear, too. He liked Fear. Tasting Fear. Wanted to know how it felt to…

Blinked and looked away. He couldn’t…. shouldn’t. It only made the Voices louder. Angrier.

He tasted fear and ash and burned flesh. Vomit in his throat.

Him or the Voices? He wouldn’t know without trying.

A hand reached out.

Flame and Pain and…

A thousand shadows in one.