The challenge for Flash Fiction for the Purposeful Practitioner will open early Wednesday morning, April 5th. Allow the prompt to take you anywhere you want to go! (Limit your stories to 200 words.)

I never understood anything about walls and fences, not til I saw the boy. He was young, ten maybe, hands holding tight to the barbed wire. Eyes looking like they’d seen the world and beyond.

I wanted to talk to him, find out his name, why he was behind the wire. I’d been told the walls were to keep the monsters out, but the boy didn’t look like any monster I’d ever imagined. He didn’t have monster eyes.

His eyes had no hope. That’s the closest I can come to describing them.

I went to Daton. He’s the Wise One. He knows everything.

“Whys that boy behind the wall?” I asked him.

“Monsters don’t always take the shape you might imagine.”

And so I went to the wall every day. Watched him. Waited for him to turn into a monster.

And, you know, he never did. 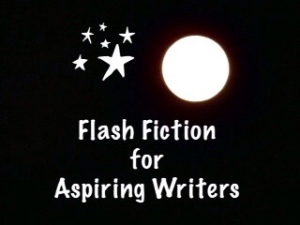 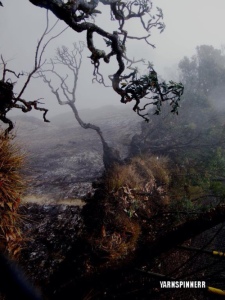 This week’s photo prompt is provided by Yarnspinner.

The thing had to have come from here, according to Becky, and what better place to birth a monster? The lingering scent of smoke filled his nostrils, fire out but not forgotten.

Did he believe in monsters? No, not really. All the monsters he’d ever feared had been childhood monstosities under his bed or inside his closet.

Did he want to be here? No. The wildfire had come too close, something of which he needed no reminder.

But here he was. He could tell her he’d come, looked around and seen nothing. Ease her mind. Have a hotdog. Watch the game.

Maybe, one day, she’d get over her fear of monsters. That usually happened, right, at the end of childhood?

Ever hopeful, he headed home, already thinking of the game.

Dark crept out of ash behind him, a gnarled grotesque thing, the smell of fire and smoke swirling around the door as he went inside. Tendrils, like fingers, seeping in.

I write to give them {teenagers} weapons–in the form of words and ideas-that will help them fight their monsters. I write in blood because I remember what it felt like to bleed.”
― Sherman Alexie 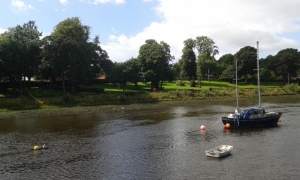 “Is this some weird ball game?” she asked, watching the floating balls trailing behind the ship.“No,” Brad laughed. “They’re floats. We use them to mark the location of…. well, anything really. Dive sites. Lobster traps. Crab pots.”

“In other words, the yellow sticky notes of the water world.”

“Exactly. I knew there was some reason I wanted to date you. I love pretty smartypantes.”

She slapped his shoulder. “So, what are we up to today?”

Something swirled under the boat, rocking it side to side.

“You’ll see.” He nosed the boat into a small island cove, lowered the anchor and shut down the engines.

Grabbing a bucket of fish, he moved starboard, tossing a few into the water. A dark shape rose towards the surface. The fish vanished. A snout tipped above the waterline as Brad lifted another fish above his head. The rest of a reptile-like head followed, taking the fish gently, then rising to tower above them, long neck arcing gracefully down.

“This time,” he said, holding out the bucket, “you feed him.”

Eyes wide with wonder, she held up a fish.

I always wondered who ‘They’ are.  Is there some super-secret Outfit putting out the truisms, half-truths, puzzles and all riddles of the universe? If so, I hoped to hell I never met them. Beating up that Outfit might not be a wise career move.

Not that I’ve made many wise career moves myself. I tend to do or say the wrong thing on a fairly regular basis. It’s my God-given talent.

I’d been through the Dream Machine several times, more than advisable certainty, always hoping to find a dream with which I could live. Clowns and ponies and happy rainbows aren’t a needed commodity in anyone’s life, much less mine. I couldn’t think of anything less appropriate. Thing is, you’re only allowed one dream. ‘They’ monitor those things. Little lying bastards.

Unless, of course, you’re me. I refused to settle, which I always thought a commendable trait. The third time changed my mind forever. The third time was when the nightmares begun.

“Whoever fights monsters should see to it that in the process he does not become a monster. And if you gaze long enough into an abyss, the abyss will gaze back into you.”
― Friedrich Nietzsche

Word Count is off! Let’s focus on the theme of the thing. Not many actually stick to the word count anyway. (SUGGESTED-No more than 500 if you want to try that.)

The monster was eating him from the legs up, crunching flesh and bone and something inside that had no form. Every day, he woke as the sun broke over the trees, dream fading, dimmer and dimmer, until it was nothing more than a ghost inside his head.

In the daylight, he remembered the good things from his yesterdays: the number of words written, pages filled, the number of times, and there had been many, when his voices refused to do as he wanted. He wrote one thing, but when he returned, an hour or a day later, his words were gone, replaced by the voice’s stories.

Most times a better story than his.

Their stories gave him security in life, no need to worry about bills to be paid, groceries to be purchased, dinners and movies and dances to be missed. He didn’t remember the last time he had gone to a dinner or a movie or a dance. Most of the time he pushed those memories aside. Time enough for regret later.

He hadn’t been out of the house in three years. The days and weeks disappeared like his words, written and gone, while he tapped away, praying for one story of his own. He wasn’t selfish. He didn’t want to silence the voices. He wanted time to write the story of stories, pouring out heart and soul so perfectly he would never be forgotten.

He paced the floor, using up the days. A day. A week. A month. A year. Five years. Ten. Twenty. Fifty. Searching for that one story. None of them right. None of them perfect.

The monster ate him up one night deep in February, a thick blanket of snow silencing keys tapping out his screams.

“What would an ocean be without a monster lurking in the dark? It would be like sleep without dreams.”
― Werner Herzog

“Monsters exist, but they are too few in number to be truly dangerous. More dangerous are the common men, the functionaries ready to believe and to act without asking questions.”
― Primo Levi

“A monster that refused, sometimes, to behave like a monster. When a monster stopped behaving like a monster, did it stop being a monster? Did it become something else?”
― Kristin Cashore, Graceling