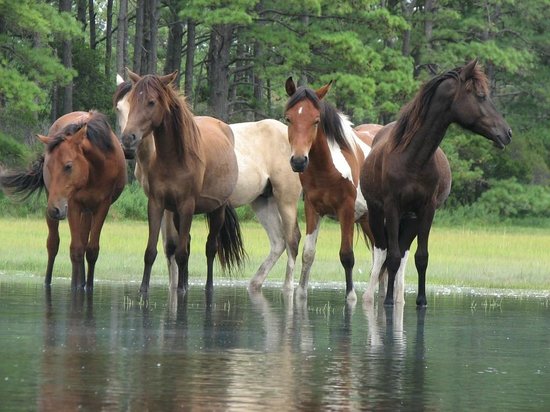 Tomorrow,  I will be visiting Chincoteague Island again. It amazes me how many people don’t know about Chincoteague and it’s ponies.  Then again, not everybody is horse-crazy. Still, it boggles my mind to think there are people who don’t know about the wild ponies, Pony Penning and have never dreamed about buying a pony at the auction.

Chincoteague Island is Barrier Island off the cost of Virginia. It snuggles up with

Assateague Island, shown in green. These islands have long been the home of bands of Chincoteague Ponies, most likely descents of Spanish horses stranded by shipwreaks. These ponies first came to fame in the fictionalized version of a true story, Misty of Chincoteague, written by Marguerite Henry. Subsequent books include, Stormy, Misty’s Foal,  Seastar, Orphan of Chincoteague and Misty’s Twilight.

Two separate herds roam Assateague, separated by a fence on the Virginia/Maryland border, totaling roughly 150 horses. The ponies are owned by the Chincoteague Volunteer Fire Department. Every July, the fireman, called ‘Salt Water Cowboys,’ round up both herds and swim the ponies across to Chincoteague. During the annual Fireman’s Carnival, foals are auctioned off to raise money to fund the needs of the Fire Department. Pony Penning began in 1925 and has grown in popularity ever since. People from across the US flock to watch the Ponies swim the channel, then parade down Main street to the fairground on the last Wednesday and Thursday of July.

Foals used to sell for low prices, making owning a Chincoteague Pony the dream of thousands of little girls, and boys, across the country. Compare this with the 2015 sale, where the highest sale price was $25,000, a new record. The average price of a foal last year was $2779, also a new record, and 61 foals were sold. The lowest bid was $500.00. This isn’t some little Podunk auction anymore. The sale not only provides for the needs of the Fire Department, it also ensure the size of the herd remains around the 150 mark.

After the sale, the remaining adults and those foals too young to be separated from their mothers, swim back across the channel for another year of sea grass and sand dunes.

For those of you not besotted by horses, this may seem rather boring.  To those horse-lovers in the world, however, Pony Penning is something of a Holy Grail, at least it has been for me. Many a year, I begged my parents to take me to Pony Penning.  Wise souls they were, they always refused.  Now, I understand nothing good would have come from taking their daughter to the auction and not getting a pony.

During the year, the Ponies live on the Chincoteague National Wildlife Refuge.  Along with swimming at the beach, hiking trails or going to the top of the Lighthouse constructed in 1833, visitors can learn about the myriad of wildlife that lives on, or migrates through, the islands. The most exciting adventure for horse lovers, however, is searching for that rare glimpse of wild ponies. 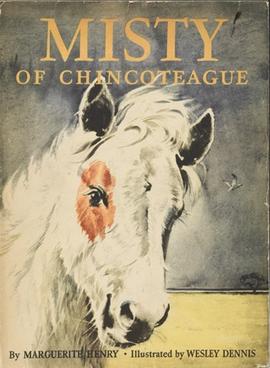 All photos are in the public domain.

Up and Down the River Rivanna