The first use of horses in war was recorded in Eurasia between 4000 and 3000 BC. They  were ridden or driven, used for Cavalry charges, communications, raiding, or suppling the troops on the front line. Mules and donkeys also played an important role in supporting the troops in the field.

Bucephalus – ridden by Alexander the Great. Alexander tamed the horse when he was 13 and they fought together in many battles. According to legend, Bucephalus died after the Battle of the Hydaspes in 326 BC and is buried in Jalalpur Sharif . He is thought to have been a huge black horse with a large head, a star, and one blue eyes.

Marengo – Owned by Napoleon Bonaparte ,  imported from Egypt in 1799 at  six-years-old. A grey Arabian standing at only 14.1 hands, he was a courageous and reliable mount. 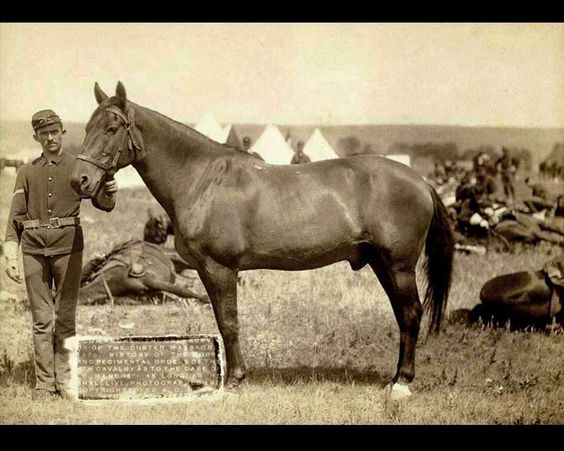 Comanche, of uncertain  breed, owned by the US Army and ridden by Captain Myles Keog of the 7th Calvary, was the only survivor of the Battle of the Little Bighorn in 1868. After this, the Army made him an honorary Second Commanding Office of the 7the Calvary. He died in 1891 and was given a military funeral.

According to the farrier for the 7th Calvary:

“Comanche was a veteran, 21 years old, and had been with the 7th Cavalry since its Organization in ’66…. He was found {after the battle}by Sergeant [Milton J.] DeLacey [Co. I] in a ravine where he had crawled, there to die and feed the Crows. He was raised up and tenderly cared for. His wounds were serious, but not necessarily fatal if properly looked after…He carries seven scars from as many bullet wounds. There are four back of the foreshoulder, one through a hoof, and one on either hind leg. On the Custer battlefield (actually Fort Abraham Lincoln) three of the balls were extracted from his body and the last one was not taken out until April ’77…Comanche is not a great horse, physically talking; he is of medium size, neatly put up, but quite noble looking. He is very gentle. His color is ‘claybank‘ He would make a handsome carriage horse…”

(1.) The horse known as ‘Comanche,’ being the only living representative of the bloody tragedy of the Little Big Horn, June 25th, 1876, his kind treatment and comfort shall be a matter of special pride and solicitude on the part of every member of the Seventh Cavalry to the end that his life be preserved to the utmost limit. Wounded and scarred as he is, his very existence speaks in terms more eloquent than words, of the desperate struggle against overwhelming numbers of the hopeless conflict and the heroic manner in which all went down on that fatal day.

(2.) The commanding officer of Company I will see that a special and comfortable stable is fitted up for him, and he will not be ridden by any person whatsoever, under any circumstances, nor will he be put to any kind of work.

(3.) Hereafter, upon all occasions of ceremony of mounted regimental formation, ‘Comanche,’ saddled, bridled, and draped in mourning, and led by a mounted trooper of Company I, will be paraded with the regiment. 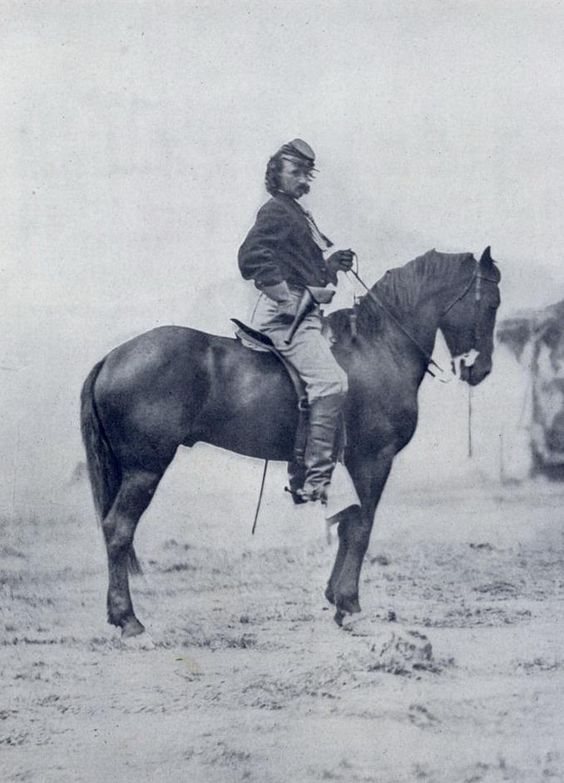 Custer had two horses, Victory and Dandy. He was riding Vic, a dark bay Morgan, during the Battle of Little Bighorn and the horse was killed along with his master. Dandy, a chestnut Thoroughbred, was with the pack train, and he survived.

The horse was the backbone of the Civil War. They moved guns and ambulances, carried generals and messages, and usually giving all they had. An instruction from Major General William T. Sherman to his troops shows the value of the horse to the army:

“Every opportunity at a halt during a march should be taken advantage of to cut grass, wheat, or oats and extraordinary care be taken of the horses upon which everything depends.”

The total number of horses and mules killed in the Civil War totals more than one million. In the beginning of the war, more horses were killed than men. The number killed at the Battle of Gettysburg totaled around 1,500. The Union lost 881 horses and mules, and the Confederacy lost 619. (The Horse in the Civil War, Deborah Grace). 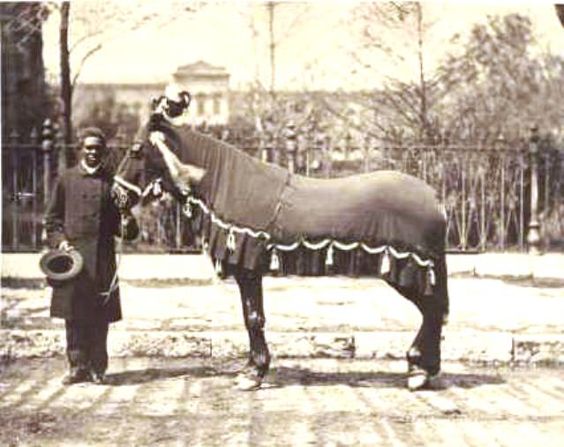 Abraham Lincoln’s horse, Old Bob, a reddish-bay, was Lincoln’s horse while riding the circuit as a lawyer. When elected president, Lincoln sold Old Bob to John Flynn. Old Bob was used at least twice more, once at a parade to celebrate Richmond, VA being named the capital of the Confederacy and also in Lincoln’s funeral process, right behind the hearse. 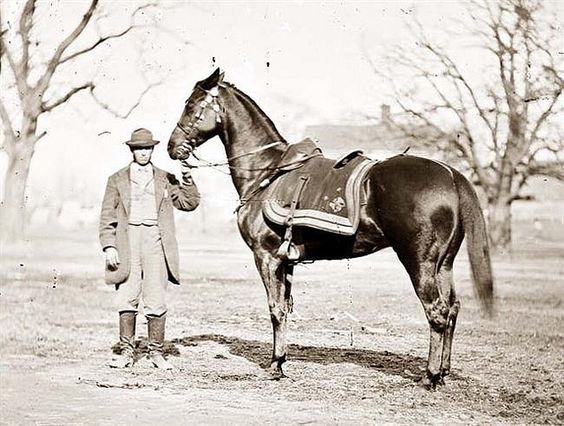 General Ulysses S. Grants’ horse, Cincinnati (ca. 1860–1878) was his favorite mount.He was the son of Lexington, the fastest four-mile Thoroughbred in the United States (time 7:19.75 minutes) and one of the greatest sires. Cincinnati was also the grandson of the great Boston, who sired Lexington. The horse was large (17 hands (68 inches, 173 cm)), handsome, and powerful, and he quickly became Grant’s favorite. When Grant rode Cincinnati to negotiate Robert E. Lee‘s surrender at Appomattox Court House, the animal became immortalized. Virtually all depictions of Grant in drawings, granite, and bronze, are astride Cincinnati including at the Ulysses S. Grant Memorial, located on the Mall in Washington, D.C., at the base of Capitol Hill.

Cincinnati died in Maryland on the farm of Admiral Daniel Ammen. 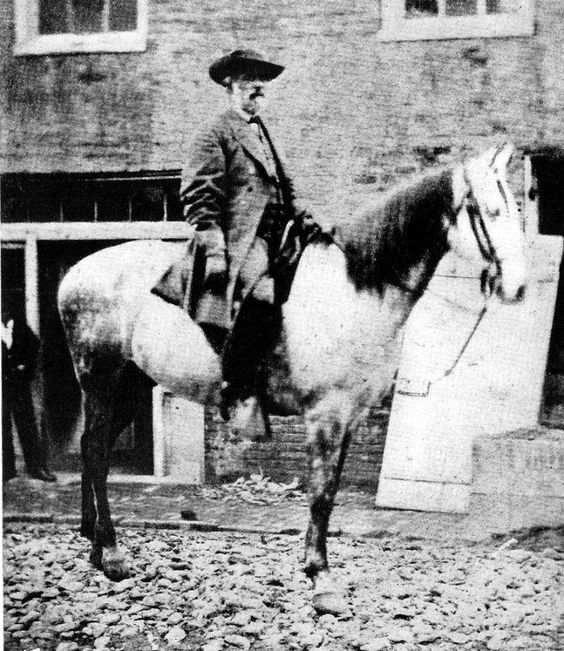 Traveller, a Virginia-bred Saddlebred, was owned by General Robert E Lee. He is one of the most famous horse ridden in the Civil War. 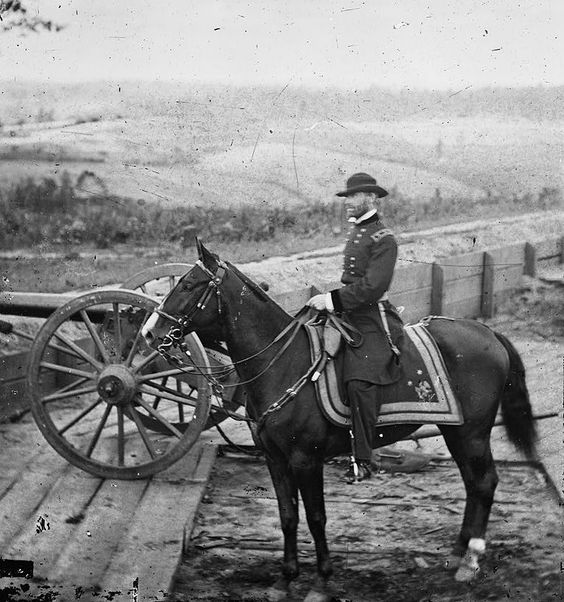 Gen. William T. Sherman on Duke at Federal Fort No. 7 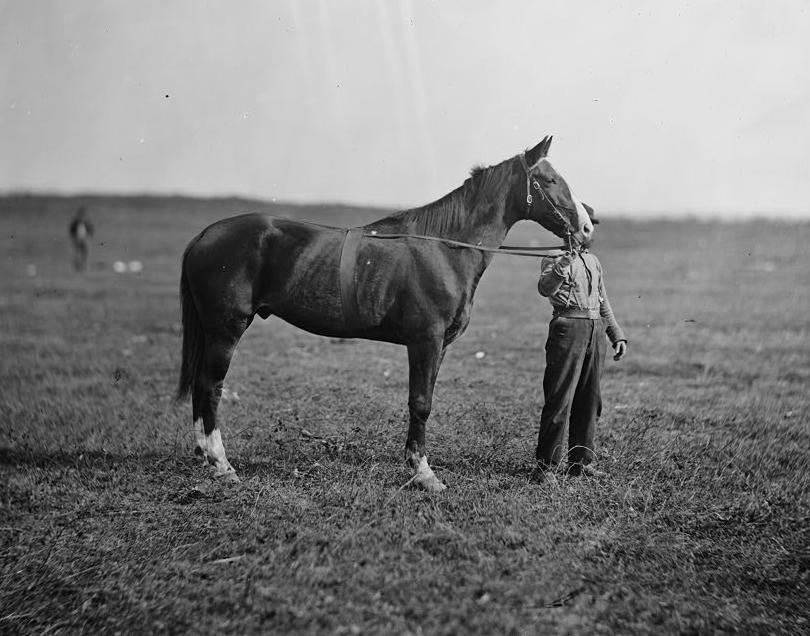 Old Baldy” (ca. 1852 – December 16, 1882) was ridden  by General George G. Meade in many battles, including the Battle of Gettysburg. It is said that he was wounded at the First Battle of Bull Run, hit in the nose by a piece of an artillery shell. Little Sorrel or “Fancy” was the mount of General Stonewall Jackson. 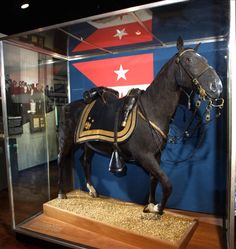 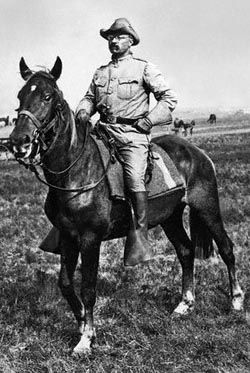 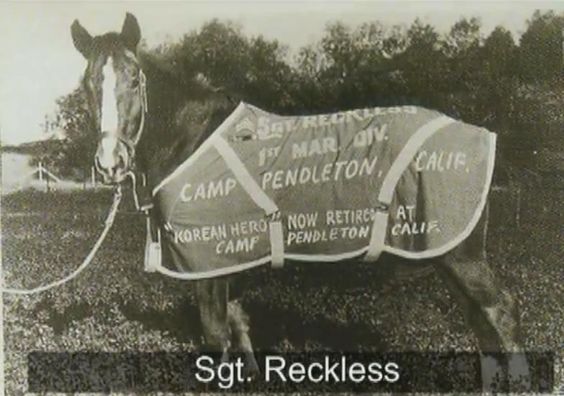 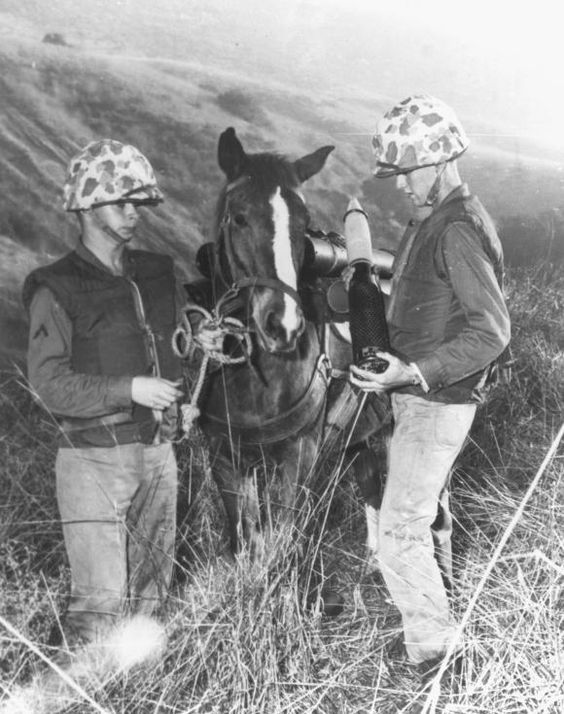 “Reckless delivered ammo to the recoilless rifle platoon’s firing sites. She would be led a few times and then could make the trip to and from the ammo dump by herself. During just one battle, she made 51 trips under enemy fire, most of them by herself. She was wounded twice but didn’t quit.” 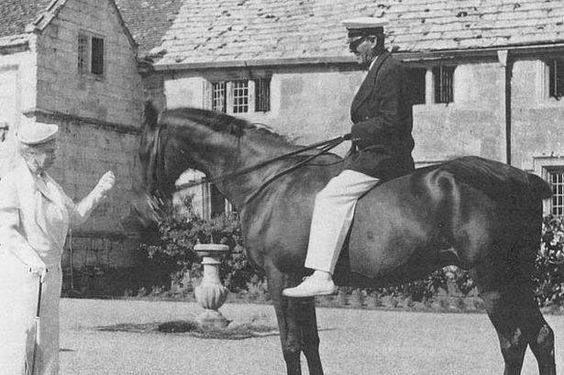 Warrior: the real Thoroughbred War Horse the Germans couldn’t kill – who braved the bullets, barbed wire and shell fire of World War I. Warrior carried General Jack Seely of the Canadian cavalry throughout the war and his bravery is documented in Warrior: the Amazing Story of a Real War Horse wrote by General Jack Seely in 1934. Pictured: Queen Mary meets Jack Seely and Warrior. 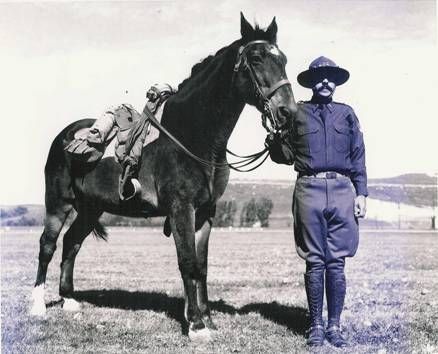 Last horse in the United States Cavalry, he achieved notoriety due only to the fact his death marked the end of the obsolete United States Army’s cavalry program. Chief entered military service in 1940 at Fort Robinson, Nebraska and was assigned to Fort Riley to join the Tenth Cavalry. By the time Chief died in 1968 at the age of 36, he was the very last cavalry mount on the rolls of the United States Army.

Thousands of unnamed horses and mules were used in war for everything from Calvary mounts, to pulling wagons and weapons of ammunition and supplies to the front lines. Eight million  horses died in WWI alone. 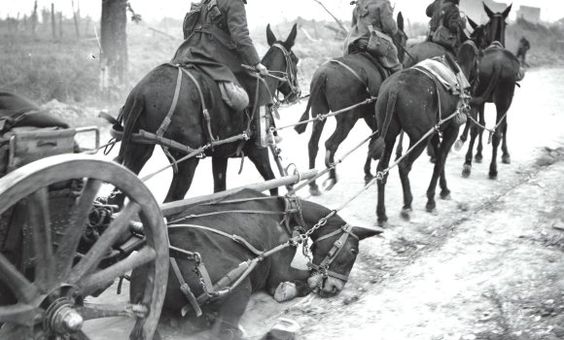 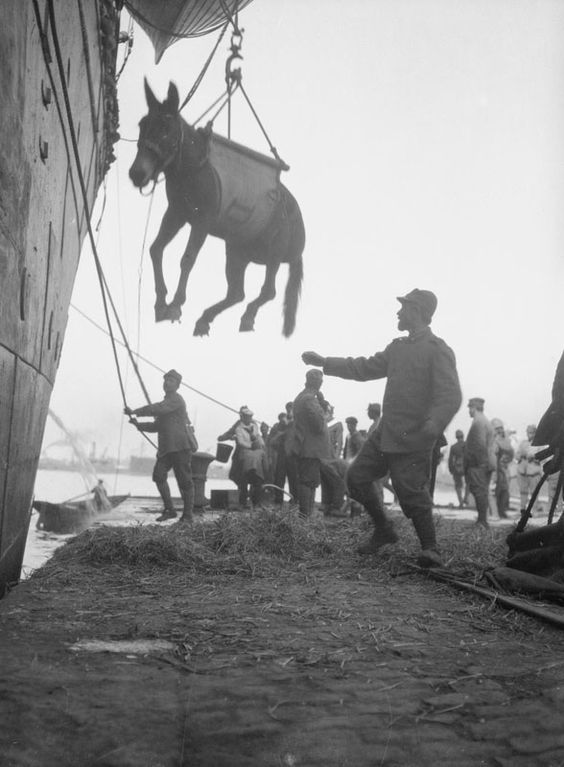 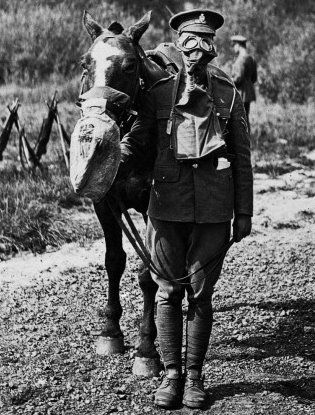 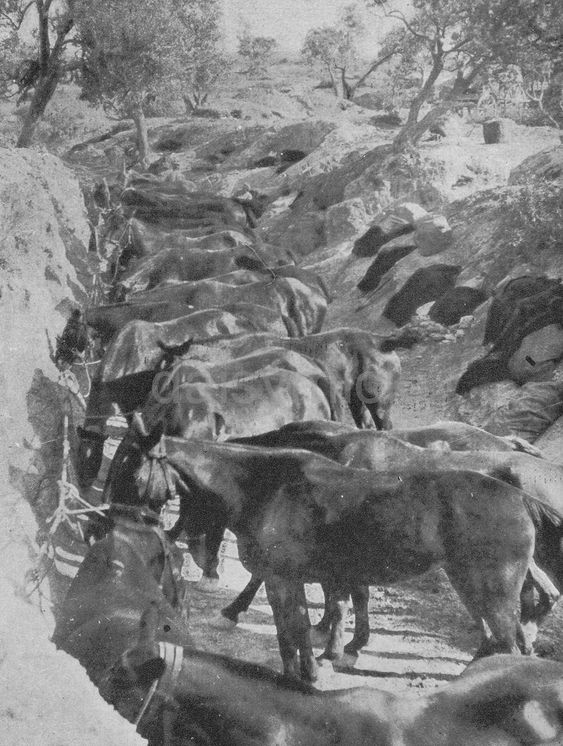 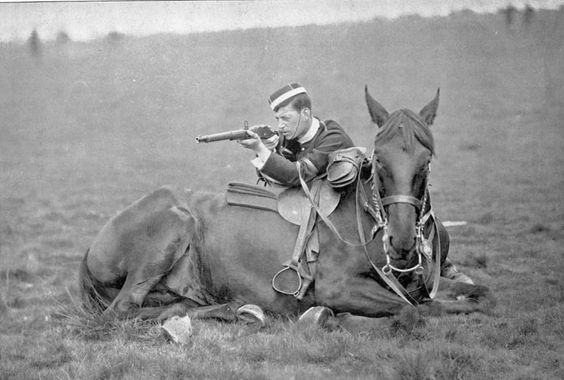 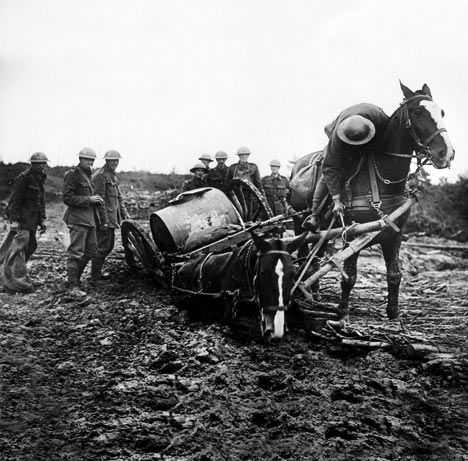 I wanted to do something different, so I decided to dust off my other love – horses – and see what developed.  What developed is a look back at one of the most famous of the ‘Cowboy Horses,’ Trigger.

Originally named Golden Cloud, Trigger was portrayed by several different horses over his TV and movie career, including Trigger, Jr. and Little Trigger. According to some reports, Golden Cloud was sired by a Thoroughbred, out of a grade mare. He was foaled in 1932 or 34 and died in 1965.  The different Triggers were distinguished by their marking.  The original Trigger only had a left hind stocking and a wide blaze.

Trigger, Jr. was a Tennessee Walking Horse named Allen’s Golden Zephyr. A Palomino sabino, he was foaled in 1941, by Barker’s Moonbeam, out of Fisher’s Grey Maud. Roy purchased him 1948 and he died in 1969. Trigger, Jr. was mostly used for public appearances. He had four white stockings and a wide blaze..

I have not found any reference to Little Trigger’s original name, foaling date or when he died. While Trigger, Jr did mostly public appearance, Little Trigger was usually the stand-in for TV and movies. He had four stocking and a narrow blaze

There is also a reference to three additional Trigger doubles – Pal, California and Monarch. The only other information found was a picture of Roy on Pal. Since this horse had only three stockings, he is not Trigger, Little Trigger or Trigger, JR..

Trigger’s first movie was The Adventures of Robin Hood in 1938. He was ridden by Maid Marion, played by Olivia de Havilland. When Roy Rogers was cast for the movie Under Western Stars in 1938, Trigger was brought to the set with four other horses so he could pick a mount for the movies. He chose Golden Cloud, shortly thereafter named Trigger. In all, the pair starred in more than 80 films, 101 episodes of The Roy Rogers Show and many public appearances. Trigger shared top billing with Roy on the movies My Pal Trigger in 1948 and Trigger, Jr. in 1950. Roy eventually purchased Trigger for $2,500, later adding the $5,000 gold and silver saddle so familiar to all his fans.

Roy said of Trigger, “He could turn on a dime and give you some change”. (IMDb Mini Biography By: Roy Rogers Jr.)

He also stated “he felt that Trigger seemed to know when people were watching him and that he recognized applause and just ate it up like a ham!” ( IMDb Mini Biography By: Roy Rogers Jr.)

Trigger was called the “Smartest Horse in the Movies” due to learning well over 60 tricks such dancing, rearing, untying ropes and shooting a gun . He was house broken so he could visit children’s hospitals.

For the movie Son of Paleface (1953), Trigger won a Patsy Award (Performing Animal Television Star of the Year). In 1958, he won the Craven Award. He was so famous, he had his own comic book, Trigger, and his own Fan Club.

When they died, both Trigger and Tigger, Jr.were taxidermied and displayed at the Roy Rogers Museum.  When the museum closed, both were sold.

If you find any of this information incorrect, please contact me so I can update this essay. Thank you.